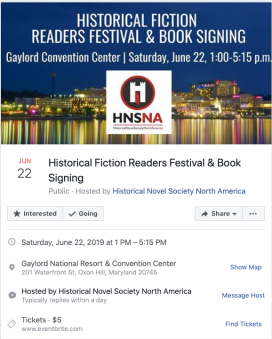 The Historical Novel Society North America will celebrate historical fiction at National Harbor on the Potomac River with a special event for all readers during their national convention in June.

The Historical Readers Festival and Book Signing will be held at the Gaylord National Resort and Convention Center in National Harbor Saturday, June 22, 1 p.m. to 5:15 p.m. In addition to authors signing their books, there will be several panels.

Conference sessions will be held at 1:15. Topics include Dynamic Duos, husbands and wives who worked together during the Suffrage Movement, Writing 20th Century Non-European History, Dance with Men in Kilts (Men in kilts not provided), Songs and Soldiers of the Civil War, a musical performance and Women of Washington, First Ladies, Society’s Sirens and Hustlers on the Hill. Presenters are all best-selling authors I know you’ll want to hear.

The centerpiece of the day is tea and coffee with guests of honor Jeff Shaara and Dolen-Perkins Valdez. Jeff Shaara is a New York best selling author, probably best known for his Civil War books. Dolen Perkins-Valdez wrote the gorgeous Wench, a Civil War era novel. That begins at 2:30 and space is limited. They’ll also be signing books at the end of the day.

I’m planning to be in attendance for the book signing at 3:45 p.m. I’m bringing the second edition of my Civil War novel, DIVIDED LOYALTIES. I’ll also have samples of my second book, a novella about two of the nurses in Divided Loyalties, Angela and Patricia. LOVE LETTERS & GINGERBREAD, a novella, tells the story of the two sisters, coping with the loss of their father as they learn about love in 1831 Annapolis.

There will also be a bookstore to buy all your literary goodies.

Tickets are $10 at the door but get them in advance on Eventbrite for $5.