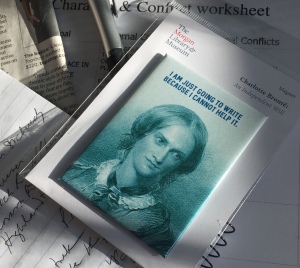 I had to have this little magnet the minute I saw it. If Charlotte Bronte had resisted the urge to write — lady writers weren’t well regarded in her day — I never would have met Jane Eyre. I can’t imagine going through life without the courageous heroine of this beloved novel. My mother gave me Jane Eyre to read. I read it again when my daughter came home with it from high school English class.

Bronte’s quote resonated with me for another different reason, too.  My compulsion to write is well known among my loved ones. “It’s you,” said one of them who was with me at the Morgan Library and Museum recently. (That’s where I saw the Bronte exhibition and this magnet.)

I couldn’t disagree. I’ve worn out the A on my keyboard in the past year. It has been a busy year

of writing. I revised a novel four times and began the query process. I wrote the first draft of a second that’s going to be so good after I revise it. Then I wrote a third novel whose revisions are nearly done. A fourth novel is in the outlining stages. That doesn’t include my travel blog, this one newly revised and plenty of newspaper and magazine articles.

I’m with you, Charlotte. “I am just going to write because I cannot help it.”