For the Baltimore Book Festival, I have been asked to participate in a fun game of book cover Bingo with fellow members of the Maryland Romance Writers. 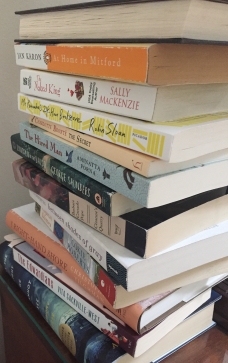 This is one of my TBR piles. I’ve started six of them. One is there so I can read it again. If you haven’t read BETWEEN SHADES OF GRAY, go get it. It’s amazing.

It is my responsibility to come up with five covers of five books I LOVE!!! to go on the game boards.

How to choose? I read a ton of books—and honestly, I am usually reading two or three or four books at the same time. Does anyone else do that?

I wanted to pick historical fiction. That was a given. I decided they had to be REALLY good. I wanted local authors though I considered making it a list of RWA RITA winners.

In the end, these are the five I finally chose. It took half an afternoon to decide.

I had to include my own Civil War novel, DIVIDED LOYALTIES—you gotta push your own brand every chance you get in this business.

I just finished THE LENGTH OF A STRING and I can’t stop thinking about the main character in this Middle Grade semi-historical by Elissa Brent Weissman. It’s a great story of an African American girl adopted by a Baltimore Jewish family who wants to find her birth mother. When she inherited her grandmother’s diary, she learns a whole new chapter to her adopted family history. It’s wonderful.

I read THE HIRED GIRL, a Middle Grade novel by Laura Amy Schlitz, a few years ago and I’m still recommending it. The story of a Catholic farm girl who comes to work for a well-to-do Jewish family in early 20th Century Baltimore, it’s a wonderful tale about tolerance and respect.

After the Romance Writers of America announced their 2018 RITA and Golden Heart winners, I decided to read them all. (In addition to that big TBR pile). Of course I went for the historical fiction first. Kelly Bowen’s BETWEEN THE DEVIL AND THE DUKE is funny, sassy and an easy read. I didn’t even know it was part of a series as I devoured it. This is my only non-local writer—but it’s such fun!

Finally, I chose Erika Robuck’s CALL ME ZELDA. We both went to the same high school (20 years apart) but I didn’t find that out until after I’d read this wonderful story about my favorite F. Scott and Zelda Fitzgerald. I met Erika when we were both invited to a book signing with Nora Roberts at the Turn the Page Book shop in Boonsboro last December. I love Erika’s books that have regular (fictional) characters rubbing elbows with famous people like Fitzgerald, Hemingway, Hawthorne and Millay.

I’m happy with my choices and can’t wait to see what my fellow panelists have chosen.

Are you coming to the book festival? Make sure you check this out: Sunday 11 a.m. in the Maryland Romance Writers tent.

One thought on “Book cover Bingo!!”