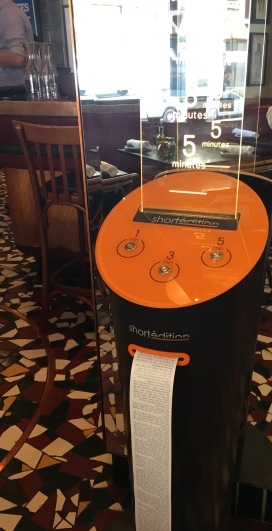 The Short Story Dispenser at Cafe Zoetrope in San Francisco spits out short stories on long sheets of paper.

And orders up a short story.

And then another. True story!

Where was I? Cafe Zoetrope in San Francisco. This flatiron shaped building near Chinatown and North Beach is owned by Francis Ford Coppola.

I am drawn to it like the proverbial moth to a flame. It started as a newspaper office. Great filmmakers work in this building. Musicians from the Kingston Trio to the Grateful Dead recorded music in the basement. And on the ground level is a charming little restaurant and bar with all sorts of mementoes of Coppola films and his wineries in Napa and Sonoma. The booth in the corner by the bar is even roped off. You gotta be named Coppola to park your carcass here.

I stopped in to introduce a friend to this hallowed place and we discovered the Short Story Dispenser. Push a button and get a story that will take one, three, or five minutes to read. I read a bittersweet story about an orphanage. 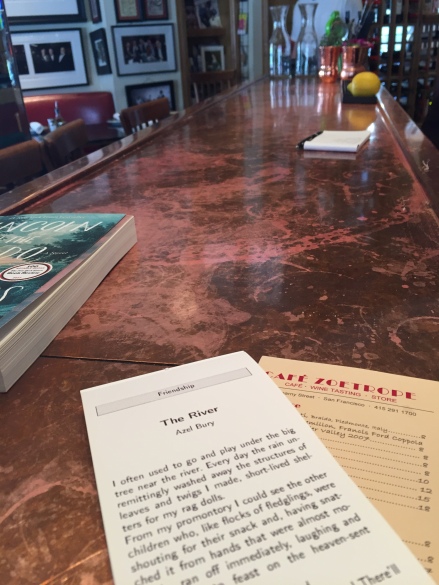 I picked a three-minute story and got a tale about an orphanage in a far-off place to read while sipping my cappuccino at the bar.

These dispensers were begun by a French group called Short Edition and this is the first in the United States. There are now others around the country: in Boston, at Penn State, in West Palm Beach and Columbus city schools. The website also doles out short stories. You can pick depending on your mood.

I wondered where all the stories came from so I have emailed Short Edition to ask them where their stories come from. When I get the answer I’ll post it here.

In the meantime, if you need a little literary pick-me-up, stop in Cafe Zoetrope one of the other dispenser locations. Or visit the website.

3 thoughts on “A writer walks into a bar…”