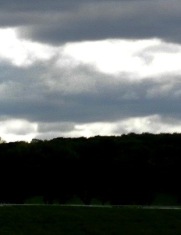 Megan didn’t care whether the storm raged for the rest of the night. Let the thunder roll through the valley. Let the lightning crash through the orchards. Let the rain force Antietam Creek to overflow its banks. None of it compared to the ire in her heart.

“How can you be so stubborn?” she asked her father. Father doesn’t understand. He should but he doesn’t. Scorn tinged her voice. Father’s thick brown eyebrows shot up high above his dark eyes.

She didn’t care; she’d launched this attack and she planned to continue. “You stood up for Ireland every night in your pub. I remember all those men’s speeches about defending Ireland.

“Maybe I was too little to understand, but I loved hearing them.” Megan stood there in the middle of the room, her eyes never leaving her father. Blood pounded in her ears. “And then suddenly you left, didn’t you? Packed us all up and moved away. How could it be that Ireland meant nothing to you in the end?”

“I’ll not have you talk to your father in this manner.” Her mother’s tone was even, soft but steely.

“Surely you understand, Mother. Our country is at war.” Megan wheeled around to face her.

“Understand? Yes,” her mother said. Then she put down the towel and pressed her hands against the back of the kitchen chair. “And so does your father.”

Meagan and her brother Keith watched as their mother in measured movements walked over to her chair next to Henry’s and sat down. Mary took her husband’s hand, glanced at him with the merest shadow of a smile and then looked sternly at her two teenaged children.

“You two talk so tough. Keith, with your talk of joining the Union Army. Megan — I don’t even know what you’re talking about. You’re certainly in no position to enlist. This is not your war, for either of you. You’re too young to understand what it’s all about. You’re only 18, Megan. All you know is you have some grand call to duty.” She shook her head as a furrow formed above her nose.

Megan took her own chair, feeling chastised — and frustrated. Their father was easy to understand. He was a big barrel-chested man with eyes that could twinkle one minute and grow fiercely dark the next. His children had learned the difference.

Mother was another matter altogether. She rarely raised her voice. She never blustered the way their father did. Usually quiet, even reticent, she demanded attention when she did speak.

“Then you don’t believe we should defend our country — this nation that has given us a new start?” Keith took over the argument. He turned again to his father.  “I’m a man now and I believe I do have a duty to this country,” he asserted, his chest thrust out and his arms spread wide.

“And—” But before he could continue, lightning flashed as a crack of thunder shook the farm house. It came so bright and so loud Henry and Keith rushed into the rainy night to see what had been hit.

Megan’s mother turned to her daughter after they’d gone. “Your father can’t bear the thought of sending Joe into that war. He knows the costs better than you do,” she said. “And neither of us understands what you think you can do.”

Megan saw love and something more in her mother’s steady gaze. She wondered if it was pride that she saw.

“That old apple tree has lost a limb,” her soggy brother reported upon their return.

“It looks like it hit the shed. It’s too dark to look now. We’ll take care of it in the morning,” Father said. He dismissed his children with a look and turned to their mother. “Ready, Mary?” he asked her as he wrapped his long arm around his tiny wife. He kissed the top of her head and led her to their room.

Megan knew the debate was hardly over. Ever since war was declared, Keith had been anxious to enlist. Every time the newspapers reported a new battle, he felt it more urgently. He’d argued with their father for months with no success. Father’s intransigence only made Keith more persistent.

“I’m sorry, Keith,” she said as he rubbed his hair dry.

“Don’t worry about it, Meg,” he answered.

“I just don’t understand him. He must know how you feel. He was doing something great for Ireland,” she began.

“Yes, but then he stopped, packed everything including us and came to America.”

“He’s the reason I think this is important,” Megan said.

Megan was surprised by her older brother’s skeptical tone. “And you don’t?”

“I don’t know what to think about him,” Keith said, throwing down the towel and tossing a leg over a kitchen chair. He looked at Megan. “I thought he’d be proud of me, taking a stand for this country. Just like he did himself back home. But instead he gets mad every time I bring the subject up.”

“Don’t give up, Joe,” Megan said. “You know the day will come when he’ll see what we’ve done.”

“I don’t know,” he shook his head and bid her good night.

Pages cut from my Civil War novel. It took many false starts to get my story going. I really liked these pages, especially the relationships between siblings, between parent and grown child, and between spouses. But in the end, it took too darn long to get to the action so out these pages went. Writing is hard. Editing is harder.