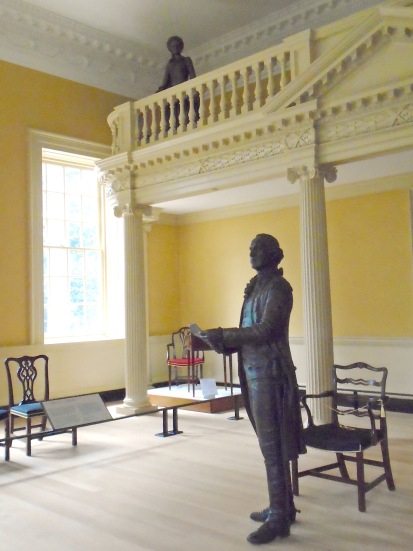 A statue of George Washington reading his speech as he resigns his commission as Commander-in-Chief at the Maryland State House in Annapolis. In the gallery is a statue of one of the witnesses on that momentous day, Molly Ridout.

Since I was a girl growing up near Annapolis, I have been awed by the knowledge that George Washington and Congress itself once graced the halls of our state capital.

It was in the Old Senate Chamber on December 23, 1783, that the General of the Continental Army resigned his commission as commander-in-chief. It was a momentous event, a new way of thinking.

Here was a man who could have become king of a new nation, a country of great resources, people and promise. Instead, he took his place in front of a Congress (which didn’t even have enough people for a proper quorum) to hand back the reins of power in a simple ceremony.

The men didn’t stand or even take off their hats as a sign of respect—for he was only one of them, a common man serving his country.

Such a great man who had led his nation’s Army to victory against the greatest nation in the world. He understood democracy and wanted to return the power he had been given back to the people who trusted him with it.

He said in his resignation speech:

“Having now finished the work assigned me, I retire from the great theatre of Action; and bidding an Affectionate farewell to this August body under whose orders I have so long acted, I here offer my Commission, and take my leave of all the employments of public life.”

It is said grown men sobbed as he took his leave. As the new civilian departed, one by one each member of Congress removed his hat as a sign of respect. Mr. Washington went home that very hour to be at Mount Vernon to spend Christmas with his wife Martha.

The chamber has been preserved and recently restored and, for me, has served as a great inspiration. A special touch is the figure of Molly Ridout up in the Ladies Gallery. Her description of that day is on exhibit, too.

More importantly, American democracy might have been a very different thing.